If you've read my previous post you'll now know how not to fit the heater box! To repair this first effort I sellotaped over a small piece of plywood and taped that over the holes in the passenger footwell, then filled from other side with P40.

This time, I marked the centre of the heater on the lower rear edge the offered it into position before dismantling it, I then marked across the bottom edge and transferred the centre line on to the body.

The heater was again taken apart and the empty box held in position using the marks made in the previous step, I then sprayed through fan mounting hole with some primer I had lying around. This outlined a rectangle and screw holes where the outlets fit.

Two of the holes were pilot drilled which allowed me to fix the outlet ports to the footwell bulkhead with self tappers and mark the holes. These were then drilled out from the footwell side.

To mark the mounting bolt holes I placed a few layers of masking tape on the front of the bulkhead and; with the outlets installed and mounting bolts screwed in from the inside, pressed the box in to position. This was enough to mark the tape so these were drilled out to 10mm to give me a bit of wiggle room.

Now the heater can be reassembled and bolted in position to mark the heater hose outlets. I had already pilot drilled the holes for the battery cables so used the top one of these as a reference to measure from to the straight outlet. These measurements were transferred to the engine bay side and the first hole pilot drilled. I then measured 65mm rearwards from the other outlet and pilot drilled again, the holes will be opened out fully when the engine bay bulkhead has been gelled.

The heater has been removed again for now while install the wiring loom. 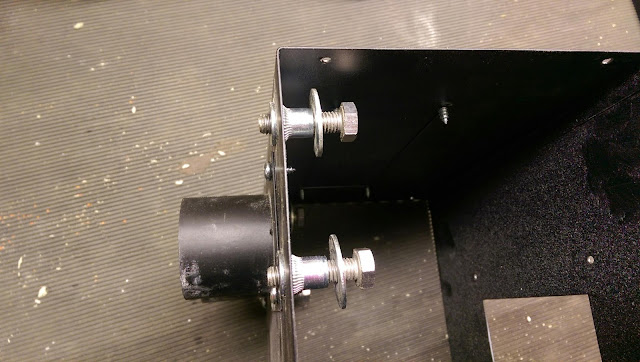 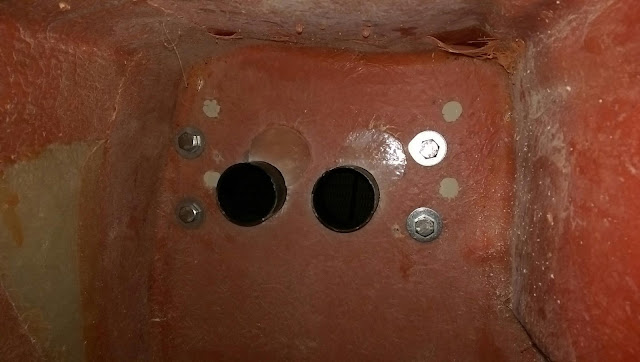 Installed as seen from footwell, you can see how far out I was the first time! 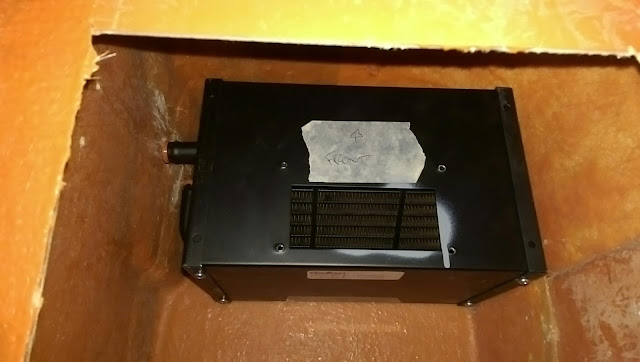 Installed from wheel arch compartment, I used the upper of the two battery cable holes on the left to measure from for the outlets
Posted by Unknown at 07:26