I was originally planning on using an LS3 with T56 Magnum 6 speed gearbox but as the cost of this combination is around £10K I started exploring other options.

Although there seem to be plenty of small block Chevy and Ford engines available I want a modern engine so started looking at Audi, BMW, Jaguar/Range Rover and Lexus.

The 4.2 Audi V8s are plentiful but trying to find a suitable RWD gearbox is near impossible, I did briefly consider building a Quattro Cobra but shelved the idea.

BMW M62 engines are also affordable but I have heard that wiring them is very difficult so decided against that.

Jaguar and Range Rover engines are also readily available but do get quite expensive if looking for power.

So that leaves Lexus. The 1UZ-FE engine is found in LS400 and SC400 UK registered cars from 1991 - around 2000 and whole cars can be picked up cheaply. The pre-95 cars had stronger conrodssoncan handle a lot of power without modification and the 98 on engines received VVTi which bumped the power up from 260bhp to 280bhp and increased fuel economy.

Another bargain I found was a M112 suoercharger which I got for £300.  It came off a Jaguar X350 4.2 and they even threw in chargecoolers for free. I'll probably put it through the IVA in standard form then shoe horn the Supercharger on afterwards.

These engines are known to be extremely strong and reliable but only ever came with auto boxes, however do get transplanted in to lots of drift cars so it is possible to convert them. I plan on either using a BMW 6 speed or a Supra Turbo 5 speed by means of an adapter plate and bespoke flywheel.

The Supra gear ratios seem preferable with the GD Euro rear diff but the BMW gearbox is cheaper, more available and known to be very strong so the dury is still out on this one. There's also the issue of IVA/DVLA and the 'one major reconditioned part' statement which might force me to buy a brand new box. If that's the case, I might go for the T56 after all. 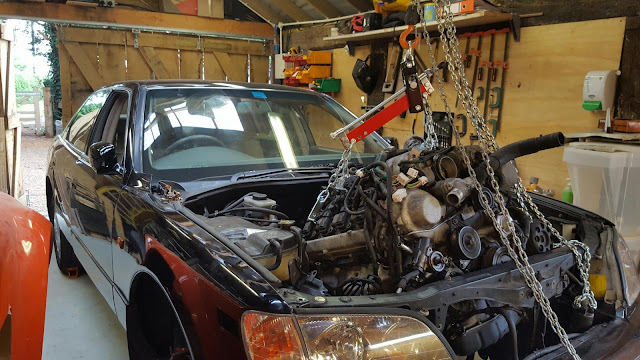